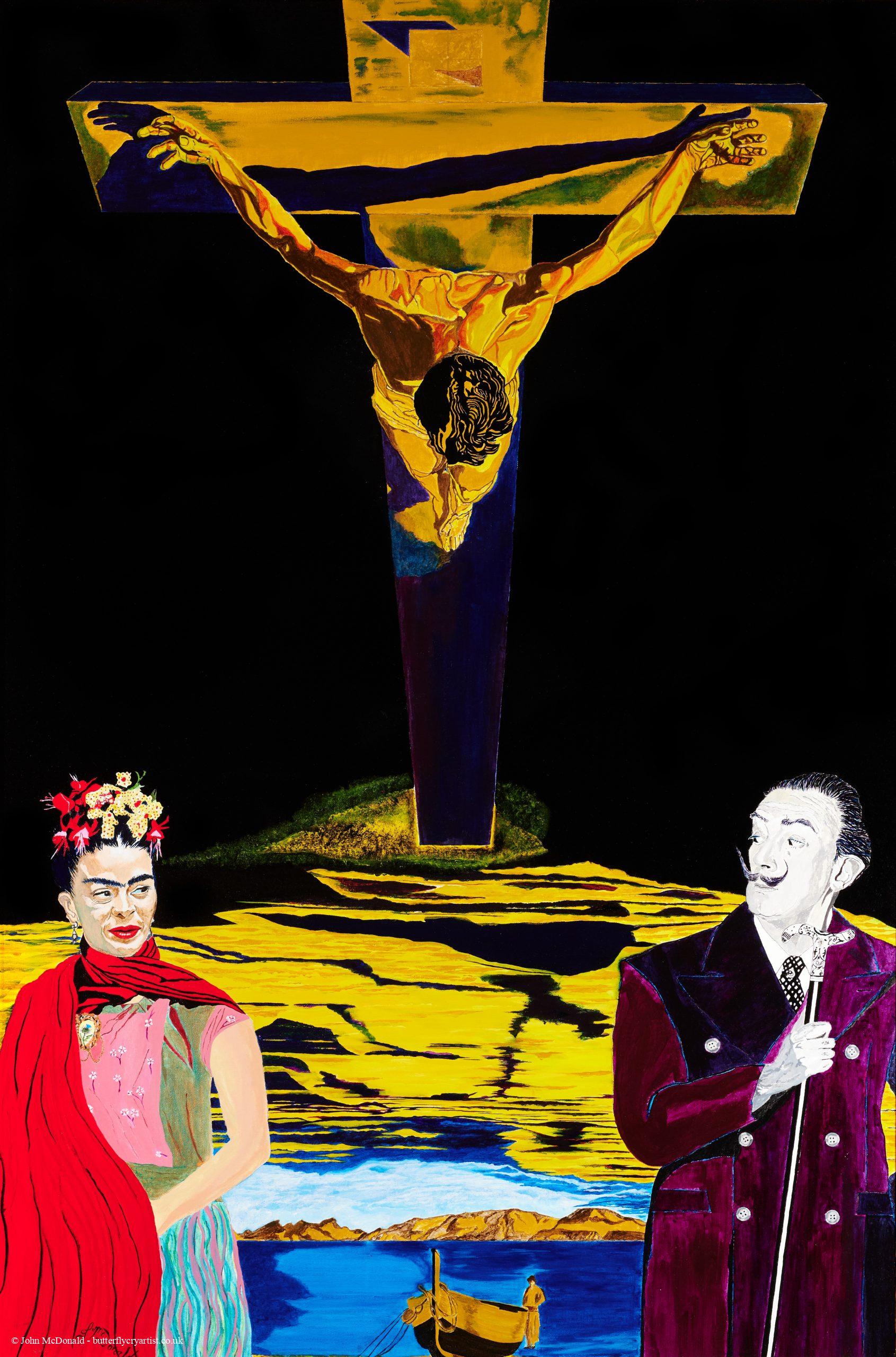 An Homage to Salvador Dali and the City of Glasgow, featuring his Mexican Heroine, by John McDonald

“A Glasgow Affair pictures an imagined meeting between Salvador Dali and Frida Kahlo in Kelvingrove, Glasgow, in front of Dali’s Christ of St John of the Cross. The greatest influence on my painting practice goes right back to my childhood in Glasgow. Like many Glasgow children in the 60s and 70s, Kelvingrove museum and gardens became a playground. But more than that: it was seeing the painting Christ of St John of the Cross by Salvador Dali, that planted the seed for a love of art, and, with its dynamic perspective and monumental scale, awakened the soul of this deaf kid from Drumchapel. When I first picked up a piece of charcoal as an adult and started to draw, it was a version of Dali’s Christ of St John that I created.

I have now created 6 large paintings which directly, or indirectly, reference Dali’s work, and the form of the crucifixion. I do not love religion, but I have a very significant love for the icon, or the ‘art’ depicting Jesus on the cross, whether it is painting, sculpture, jewellery, or religious items. I am blown away by the beauty of this thing, the dichotomy of this beauty and compassion in an image- which is in fact a brutal public murder.

It begged so many questions for me as a child, which cannot be understood without an understanding of the protestant/catholic sectarianism I grew up with in Glasgow. My work which uses and repeats this image of the cross, is steeped in a child’s rebellious reaction to sectarianism: the wake-up call of being so deeply affected by an image, that I’m not meant to look at, an image that belongs to Catholics, whom, according to my culture, I’m not meant to befriend. This was exhibited at the Catholic Cathedral Church, St Mary’s, in Derby, that stands across from Derby’s Anglican Cathedral, as part of A Pilgrimage of Art which took place during an Ecumenical Open Churches month.”

A Glasgow Affair expresses the artist's own love affair with the city of Glasgow. Born in a Glasgow tenement, inheriting a sectarian culture, this painting reflects his first striking impression of Catholicism, through Dali's painting.

The original painting is a large scale statement piece, the painting itself measure 1.5 x 1 metre, and is beautifully presented with a wide gold frame with ornate classical style. A Glasgow Affair is painted on cotton canvas in artist quality acrylics. The painting is varnished.

There is a story around the price placed on the original painting A Glasgow affair.

In 1951 Dali painted Christ of S John of the Cross which was purchased the next year by the City of Glasgow. The purchase was controversial at the time as life was poor in Scotland especially in the years following the WWII. The people of Glasgow believed the money could be put to better use and it caused an outcry. The painting is now valued at around £60 million and it is an object of pride and love to the Glasgow public. The city originally bought Dali's painting for the sum of £8,200.

In giving A Glasgow Affair exactly the same price, £8,200, John is making a tongue in cheek reference to this incident, and to Scottish pride; and he is also asking his eventual buyer to put their belief in him and his Art.

John's paintings often have little hidden symbols, and A Glasgow Affair is no exception. If you look closely at the jewellery of John's Mexican Heroine, you will see the brooch pendant is not the cameo, or Mexican Tehuana Jewellery that she wore, but is adorned with an exquisite little Scottish thistle.