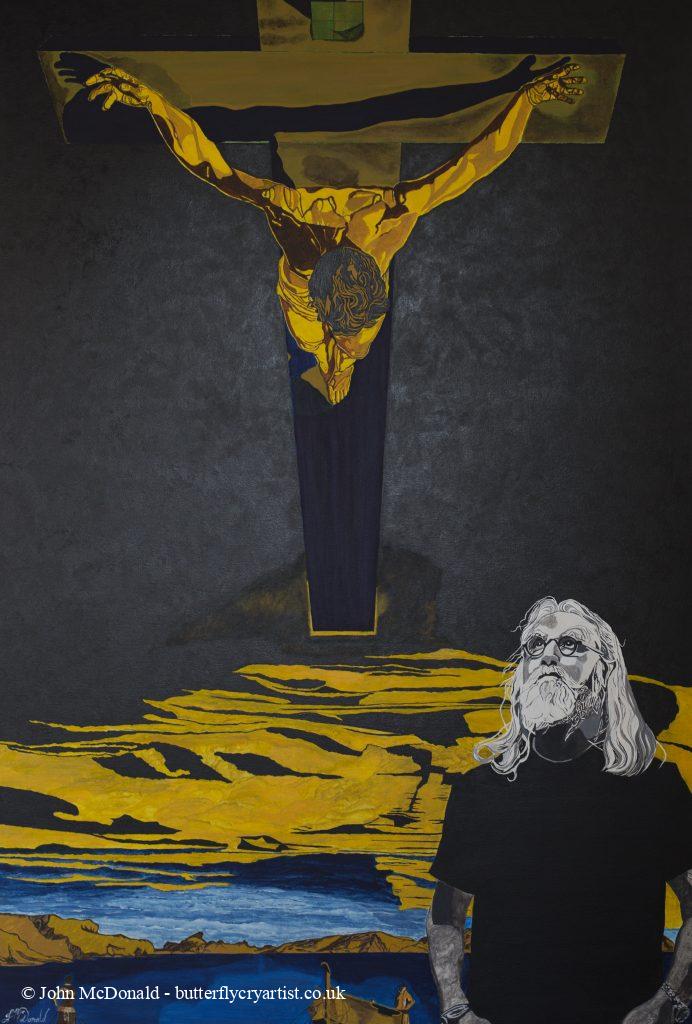 A PORTRAIT OF SIR BILLY CONNOLLY, AND AN HOMAGE TO THE CITY OF GLASGOW AND SALVADOR DALI, BY SCOTTISH ARTIST JOHN MCDONALD

The Big Yins is an homage to Salvador Dali, a tribute to Kelvingrove Art Gallery, Glasgow, and a portrait of Sir Billy Connolly. The original painting which was featured by BBC Arts in an article celebrating the 75th birthday of 'The Big Yin': Scottish comedian Sir Billy Connolly.

The portrait of Billy Connolly is taken from the work of photographer James Stenson, with whose kind permission The Big Yins was created. The original photograph, which Scottish artist John McDonald has used for a source image, was originally used for the internationally loved comedian to announce his diagnosis of Parkinson's disease in the media.

The lower part of the print features a vibrant yellow sky and a mountain and seascape, or perhaps a Scottish Loch, with two fishermen working their nets from a small boat. Beside this, painted in black and white, a portrait of comedian Sir Billy Connolly appears like a giant of a man.

John was inspired to paint The Big Yins when he saw the BBC Billy Connolly: Portrait of a Lifetime documentary. John was moved emotionally by Billy's re-visiting of his favourite painting Christ of St John of the Cross by Salvador Dali. The comedian's childhood experience of Kelvingrove Art Gallery, and Dali's work, so mirrored John's own (born in Drumchapel, and growing up in 1960s Glasgow) that John decided to paint Billy's portrait either standing in front of, or within, his favourite painting; it is up to the viewer to decide.

John's own artist statement describes being born under the image of Christ of St John of the Cross by Salvador Dali. This painting at Kelvingrove planted the seed for a love of art, and awakened the soul of this deaf kid from Drumchapel. When he first picked up a piece of charcoal as an adult and tried to draw, it was a version of Dali's work which John created.

The Original Painting is Sold