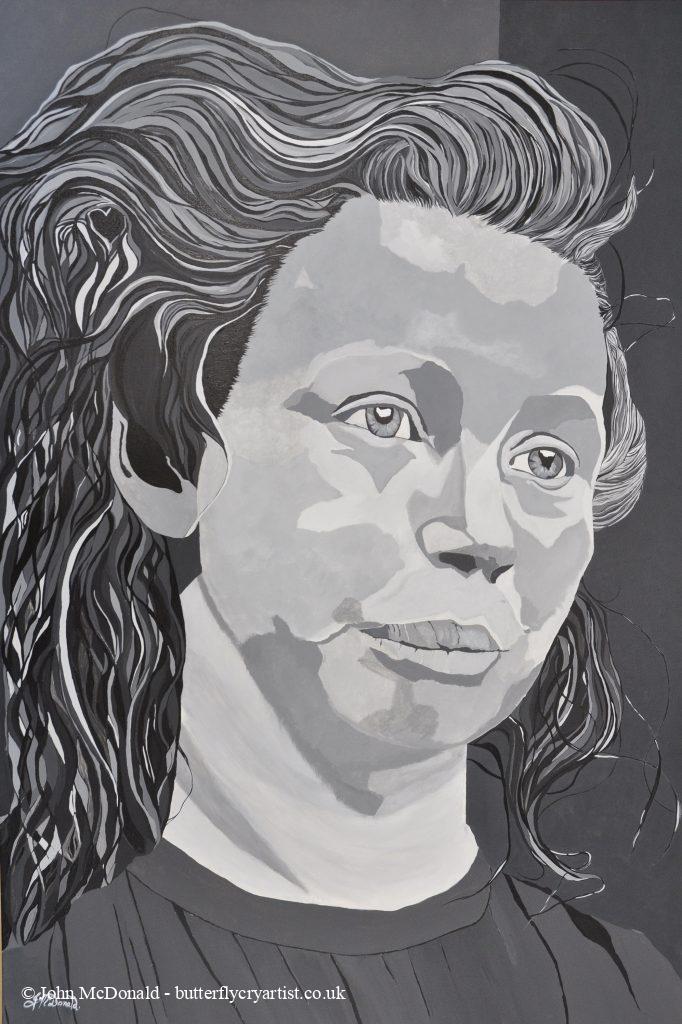 Tiffany A Girl of Glasgow

A PORTRAIT OF A GLASGOW GIRL BY JOHN MCDONALD

Tiffany A Girl Of Glasgow is an original painting by the Butterfly Cry Artist, John McDonald.

Tiffany depicts a young, unknown Scottish woman, with wild and beautiful hair. She is gazing frankly out of the painting with an elusive expression which combines sadness with hope and strength.

Painted in black, white and greys, there is a sense of rhythm and pattern in the brush strokes of the hair. A closer look will reveal shapes like a black love heart, and facets reminiscent of an ornate glass lamp. In fact the artist has given the young woman the name of Tiffany because of the way he has painted the hair a bit like a Tiffany lamp.

The portrait is the artist's emotional response to an historical photograph taken by Bert Hardy. The photograph was published in 1948 in a picture post edition titled 'The Forgotten Gorbals'.

The original photograph titled 'Gorbals Child' showed a young woman holding a baby wrapped in a blanket, with other children in the rubble strewn background. The location was the Gorbals, then a slum district of Glasgow.

The intervention of a London photographer on that Glasgow scene in 1948 had both a documentary and humanitarian intention. The photos of slum poverty were meant to draw attention to the plight of those living there- to expose hidden suffering so they could no longer be forgotten.

John is from Drumchapel, Glasgow, a district that was also notorious for poverty, and lack of prospects or safety. He has created this painting as a child of Glasgow himself, and the aim of his intervention is to portray the spirit of Glasgow- the beauty and strength of character of the people he grew up with. His ‘Tiffany’ is an angel of the spirit of Glasgow.

Not for sale
The painting is retained by the artist for personal and private display only.