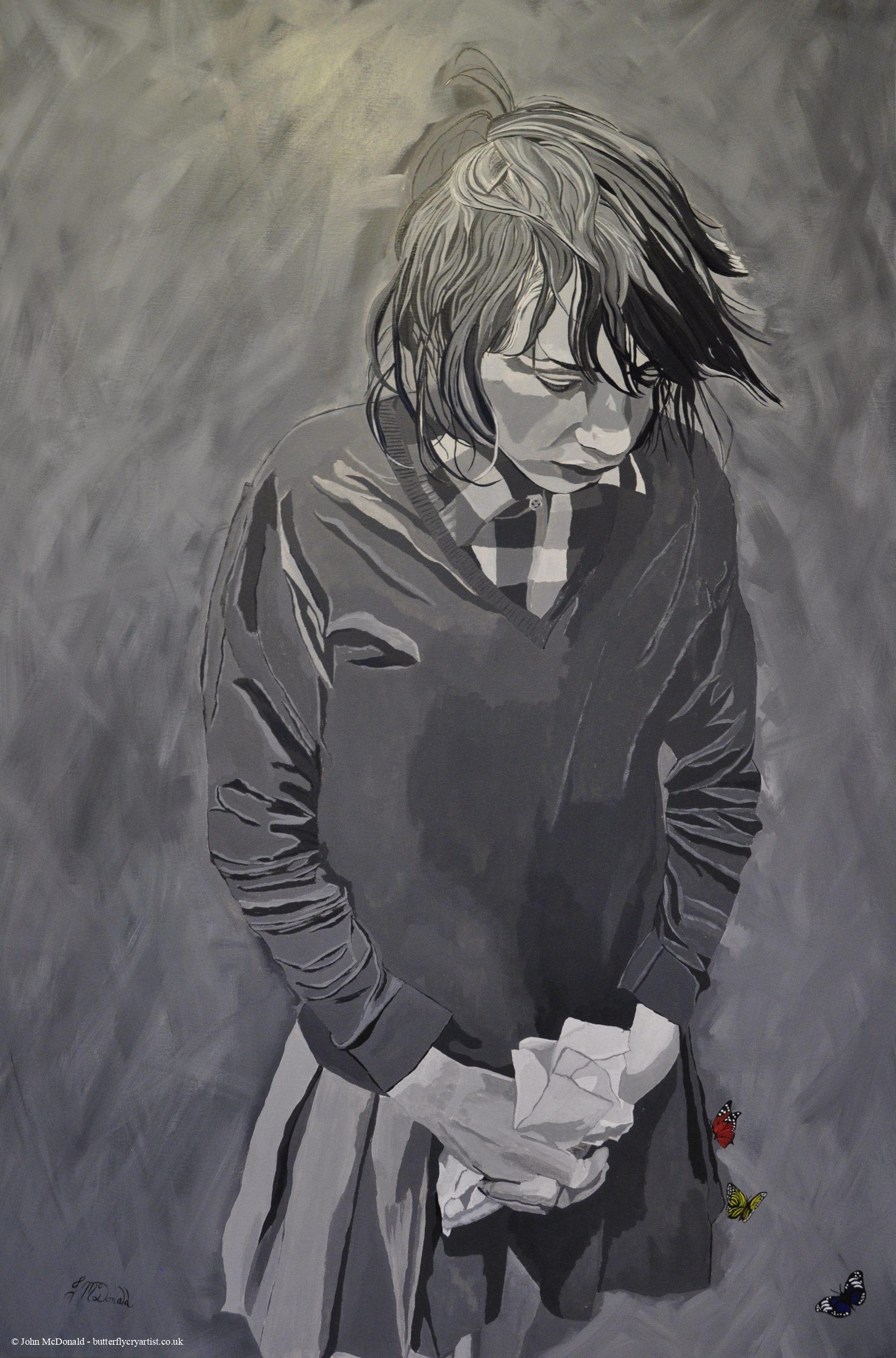 A portrait of a young girl in Glasgow by John McDonald

A Wee Sweetie is the first of a series of 12 paintings to be made in collaboration with Documentary Photographer Nick Hedges, by Scottish Artist John McDonald.

The painting, which is large, 150 x 100 cm, depicts a young girl of around 12 years of age, though she appears younger. She is dressed in school uniform of pleated skirt, checked blouse, and jumper. The artist has captured the thin look of the jumper, and the child appears vulnerable, she looks cold and her head is slightly hanging down. In both hands the child is clutching what the Scottish call a ‘poke’ of sweets, a small white paper bag.

John was reminded of Picasso’s Child with a Dove painting, which hangs in The National Gallery, and considered painting a white dove in the girl’s hands. However, as she is taking care of those sweeties with both hands, the artist thought she would not have let them go easily. So the ‘poke’ of sweets remains, and gives the double meaning of the title. As a symbol of hope, the artist has painted 3 small butterflies in the lower right hand of the canvas, trying to catch the downcast eye of his wee sweetie.

The painting is an unusual monochrome portrait, painted in grayscale. The 3 butterflies however are coloured: one red, one yellow, one blue. It is a touching gesture, offering the 3 primary colours to the child. Regardless of gender, the artist seems to be predicting his own future; that the child with the sweets and the thin jumper in Glasgow, will one day live life in colour, and this little touch of red, yellow, and blue, the artist will use to create all colours, and endless hues.

Nick Hedges was engaged by Shelter Scotland when it was first set up in 1969, to photograph slum poverty in The Gorbals and Maryhill areas of Glasgow, images that were to shock a London emerging from the Swinging Sixties.

The intention is for John and Nick to collaborate in an exhibition of 12 original photographs taken by Nick for Shelter, together with 12 large paintings.  The paintings are based on the photographs, but are also John’s creative response to Nick’s work and the individuals depicted.  Due to the Covid-19 pandemic exhibition plans are suspended, and we will post updates when appropriate.

The aim is to celebrate the character, worth, and strength of Glasgow people, as well as invite dialogue on current issues of insecure housing, child poverty and homelessness.  There is a focus on how this might be used to raise funds for Shelter Scotland, but the exhibition is seen as important in its own right, and is it John and Nick’s ambition that it take place in Glasgow.
John is of the demographic that Nick was engaged to photograph, and the project started with John’s discovery of Nick’s images, and the powerful response they evoked.  Shelter Scotland were supportive in putting the artist in touch with Nick Hedges, who is now in his 70s, and the idea of a collaborative exhibition arose from Nick and John’s meeting.