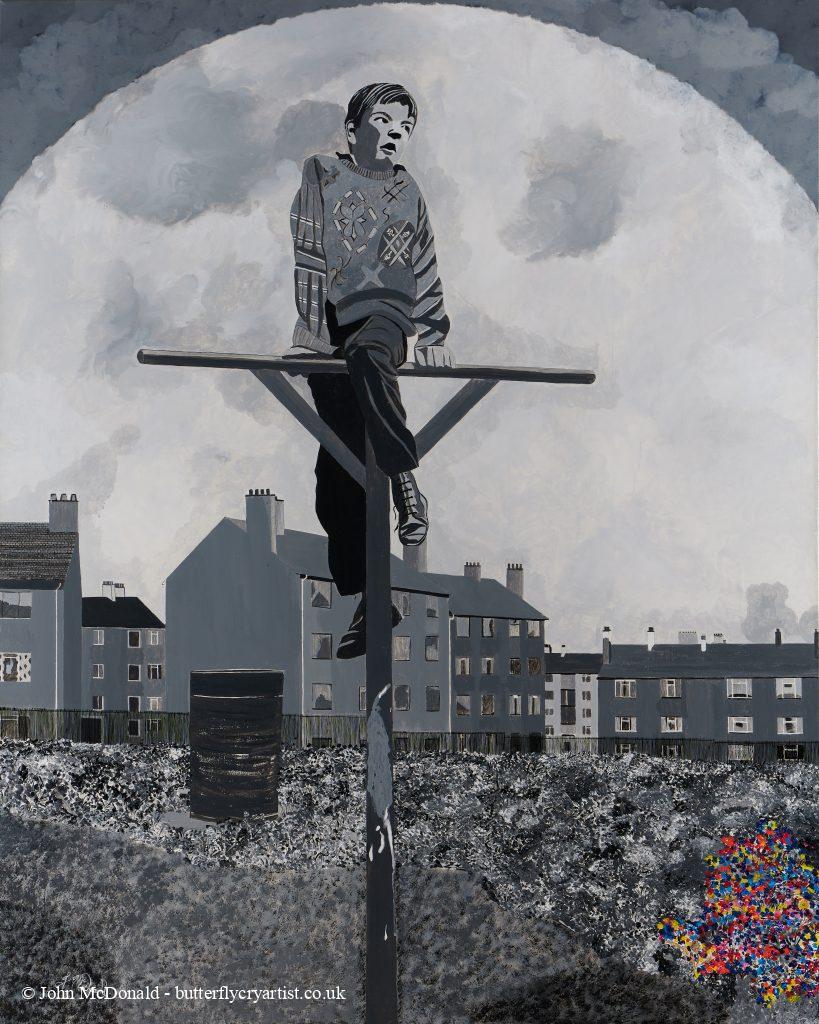 Based on Jez Coulson’s Easterhouse Crucifixion 1987

Life of McBrian depicts a small boy in the Easterhouse district of Glasgow. At the time of painting the artist believed him to have been photographed by an amateur photographer in the late 1970s, as this was how it was archived by Glasgow Police for an exhibition.

However since the image was used as the cover for Booker Prize Winning Shugie Bain, by Douglas Stuart, he has learned that the image was created by Photo-Journalist Jez Coulson, who now lives in the United States. It is known as The Easterhouse Crucifixion, and Jez Coulson has kindly given retrospective permission for the creation of John’s painting.

A familiar sight to the artist, who grew up in Drumchapel, the boy is pictured on top of a tenement washing pole, and the image calls to mind both the nostalgia of a bygone era, and the stark reality of urban poverty in Glasgow. The figure of a child from the past represents 'Yesterday's Tomorrow' and is about the hopes and dreams we all have, as well as the freedom of childhood imagination.

The original photograph shows a rubble and litter-strewn ground that is a harsh landscape for a child to make his playground. However John has portrayed the ground, right up to the tenement railings, as a beautiful meadow.

The painting is mainly in black and white, but in the right foreground is a burst of vibrant colour, as the flowers are painted in lush primary tones of red, yellow and blue. It reminds us that where there is Life there is Hope. Visually it also calls to mind the colour of the flicker of flame if you burn a black and white photograph. But the emergence of colour in the painting is like a 'burning' that is creative rather than destructive, as though nature, life and vibrancy are allowed to burn through the surface of drab reality.

The original painting is for sale directly through this website, or you may contact the artist if you wish to make an offer.